I haven’t quite recovered from my Salt Lake City trip yet and already found myself immersed in another full day of genealogy. My local genealogy society, the Houston Genealogical Forum, sponsored a British research seminar today with Paul Milner. This was another one of those experiences that reminds me that I still have so much to learn.
I dutifully took notes as he explained English parish and probate documents and map resources. I was itching to multi-task and search for my English ancestors as he showed us how to explore online sites with British records. After all, my maiden name is SANSBURY! If that doesn’t scream English, then I don’t know what does!
(Do you sense a “but” coming? You should!)
BUT I don’t know where my Sansbury ancestors came from!
I will admit I haven’t done exhaustive research on this yet. What I have done, and what I have seen of others’ research efforts, ends in Darlington District, South Carolina, with a Revolutionary War patriot named Daniel Sansbury. He died in 1816 and a transcription of his will is available on the South Carolina Department of Archives & History website. (More on him some other time.)
Having a relatively rare surname means you can do fun things like set up standing searches on eBay auctions and Google Alerts. (Don’t try this unless you have an uncommon name or your inbox will be flooded!)
Through eBay, I’ve learned Noritake has china pattern named Sansbury and that I’d pay a pretty penny for vintage cufflinks and buttons made by Sansbury & Nellis. I once bought a patch for the Sansbury/McTavish School in North Saanich, British Columbia, Canada, because, well, because it has my name on it! 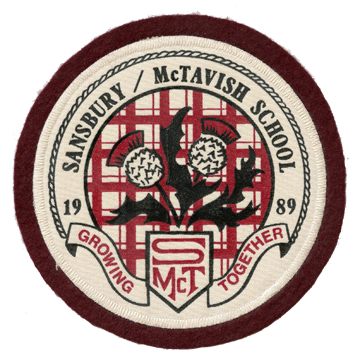 Google Alerts have brought me interesting articles about Australian Aboriginal elder Tauto Sansbury’s activism and stories about other Sansbury newsmakers around the U.S. and U.K.
I’m not ready to launch a one-name study, but as I move forward in researching my Sansbury ancestors, here are some of my burning questions:

Paul Milner rightfully cautioned me against jumping to any conclusions: I need to work on Daniel and his associates and neighbors a lot more to help give me more certainty about where to look when I finally cross the pond.

In the back of my mind I’m thinking maybe, just maybe, I will discover that we are kin to the founders of Sainsbury’s, the huge UK supermarket chain. I may not be heir to a grocery store fortune, but maybe they’ll send a poor American cousin some cool Sainsbury’s swag.

Are you a Sansbury or do you have Sansbury ancestors? Drop me a line!

6 thoughts on “Searching for Sansburys”

My Tweets
Join 303 other followers
Follow The JenGenX Files on WordPress.com

The best longform stories on the web

Getting to the Heart of your story.

Creator of The Leeds Method

Who wears the PANTS in your family?

The contents of this blog may not be reproduced without written permission. ©Linda's Orchard

My journey in Genealogy and Historical Research

Keeper of the Past Genealogy

A daily selection of the best content published on WordPress, collected for you by humans who love to read.

The Art and Craft of Blogging

The latest news on WordPress.com and the WordPress community.